80% of people with disabilities live in developing countries — UNPD

Clubfoot is usually a birth condition in which the foot is twisted out of shape or position, caused by shorter-than-normal tissues that connect the muscles and tendons. In developing countries, those with clubfoot might not have access to surgery or noninvasive treatments to correct this problem, leaving them with difficulty walking. 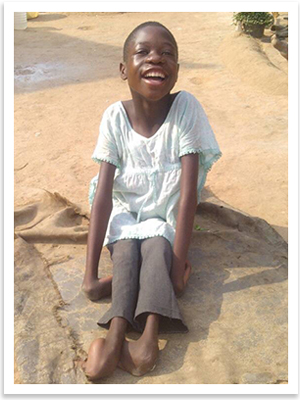 Rosemary was born with clubfoot in Zimbabwe, where fear and superstition cause people with disabilities to be shunned. As a result, her father abandoned the family.

Rosemary and her mother live in Mvurwi, a farming town in a region that was once part of the country’s breadbasket.

Her mom used to work on a farm, earning a steady income of less than $50 per month. She lost this opportunity, however, when her former employer lost the farm in a land reform program 10 years ago. She now works as a day laborer to provide for her family.

Meanwhile, 13-year-old Rosemary’s goal is to complete her education in the hopes of earning a living on her own someday. She had to drop out two years ago, however, as she could not get to school without a usable wheelchair.

Read more of Rosemary's story on our blog.