80% of people with disabilities live in developing countries — UNPD

Cerebral Palsy is caused by brain injuries or complications that occur during pregnancy, birth or during a child’s first two or three years of life while the brain is developing. Cerebral Palsy affects movements related to joints, reflexes, and posture. Many cases necessitate a mobility aid. 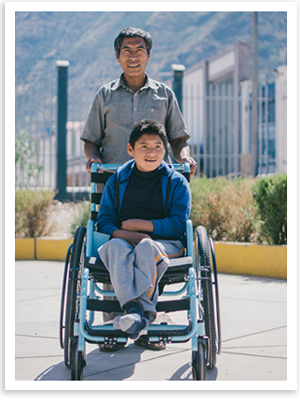 In Peru, a boy named Miguel developed cerebral palsy after complications during childbirth.

Doctors had told his mother that he would eventually be able to walk, but this did not come to pass. His mother would carry him everywhere, and as he grew over the years, she tearfully worried about his future–what would he do when she could no longer lift him up?

Miguel’s parents prayed that he would receive a wheelchair, as they could not afford one on their own. His father works long hours growing corn, barely earning enough to make it each day, while his mother takes care of Miguel full-time.

Yet, despite the challenges, the family remained grateful for what they did have, and they continued to pray for Miguel to receive a mobility solution.

Read more of Miguel's story on our blog.