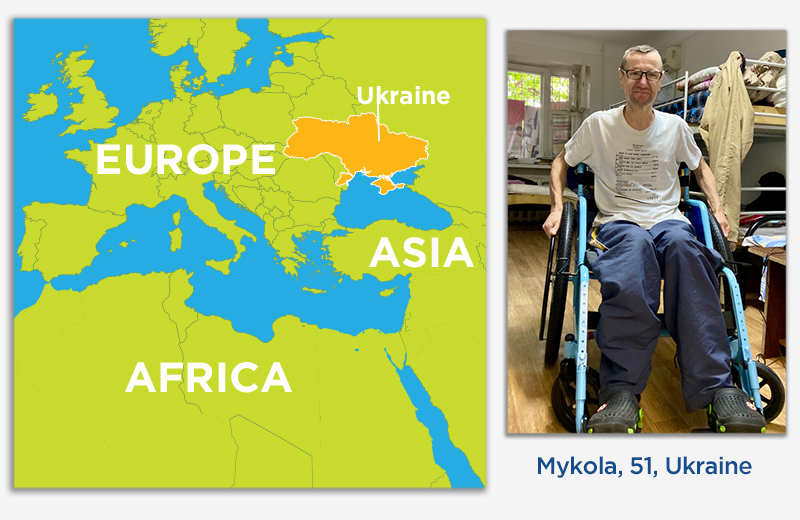 Would you keep in prayer all who are affected by the developments unfolding in Ukraine, including our former distribution partners?

Over the years, Free Wheelchair Mission has distributed nearly 16,000 wheelchairs in Ukraine through organizations including Mission Eurasia, which was still giving away wheelchairs from our last shipment to them but has had to pause due to the situation there.

And would you also pray for individuals like Mykola, a 51-year-old man who received one of our wheelchairs several years ago?

Mykola was married once, but his wife left him for “a better life.” He suffered two strokes, the last of which left him unable to walk.

With no other family members, Mykola was left on his own. He became homeless and lived on the streets for more than 10 years, with no mobility aids other than a pair of crutches that were given to him.

Volunteers would bring him food, clothes, and other essentials. Then, when the opportunity arose, they brought him to a shelter, where Mykola has lived ever since.

Mission Eurasia later fitted Mykola with a new GEN_2 wheelchair. Mykola was touched because he had been hoping to get a wheelchair but couldn’t afford one, and the staff of the shelter was also happy because they could not afford to buy one for him, either. They had been carrying Mykola wherever he needed to go.

“I can’t wait to go outside in the wheelchair,” said Mykola when he first took a seat in it. “Now, I have the freedom to move by myself and not feel that I am being a burden.” And, thanks in part to the love and care shown to him by the shelter staff, Mykola made the decision to follow Jesus.

Now, not only can Mykola go to the hospital and run errands by himself, he also helps the staff run the shelter and leads daily devotions for the residents. He has also regained more movement in his fingers and was starting to earn some money by working on a computer.

Though we do not currently distribute wheelchairs in Ukraine, our friends, like Mykola, are not forgotten.

I am thinking about what might happen to him and others in the coming days. Will Mykola be able to continue making a living, helping out at the shelter, and leading devotions every morning?

Let’s keep them all in our prayers.