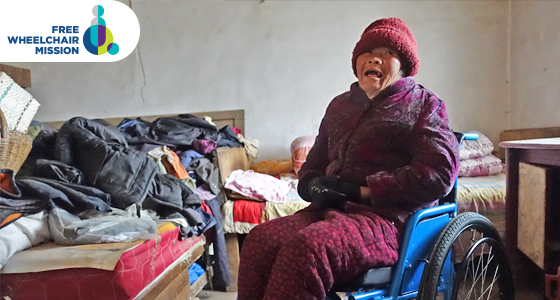 Free to Enjoy the Sunshine Because of You

In a rural village just outside of Mianchi, China, 70-year-old Ruan Ying lives in government housing with her husband of 40 years and his ailing mother.

Ruan Ying and her family’s home is one without electricity or heat. During the winter, the temperature can get as low as 27° Fahrenheit. “It is very cold, but you just get used to it, it’s the only way to survive,” Ruan Ying told us when we visited her in her home.

Seven years ago, Ruan Ying suffered a stroke, losing her mobility and her independence, becoming confined her to her home. Ruan Ying’s husband was left to care for not only his infirm mother, but also for Ruan Ying, who was suddenly dependent on him for every basic need.

However, thanks to your generosity, Ruan Ying now has a new lease on life through the gift of a new wheelchair.

Ruan Ying was thrilled to receive a new GEN_3 wheelchair, a model that folds for ease of storage in tight quarters such as her home. “I can’t wait to go outside and visit people again,” she said, expressing her gratitude for this life-changing gift. “I don’t like staying inside. I’m ready to be independent and social again!”

Your generosity has given Ruan Ying and others like her a renewed sense of freedom they thought they’d never have again. Ruan Ying is longer confined to her unheated home or dependent on her husband to carry her.

Thanks to friends like you, she can go outside and enjoy the sunshine with her friends.