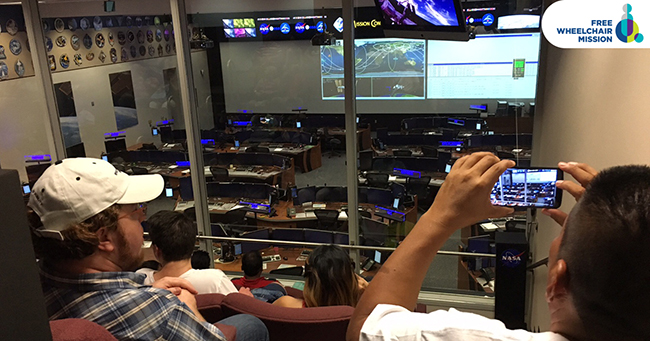 Waiting Patiently for a Breakthrough

One of the highlights of our recent gala, Miracle of Mobility, was meeting three wheelchair recipients who came from Vietnam, Jamaica, and El Salvador as our special guests. While they were invited primarily to speak at our annual event in California, they also traveled to meet with supporters and have a bit of fun, too.

Amilcar, a 45-year-old man from El Salvador, visited the beautiful city of Houston, where he met with members of our Southwest Regional team. Andy and Karen Loyd provided accommodations at their lovely home, where Amilcar was treated to a special tour of Andy's racing cars and collection–including a 1963 Chevy convertible, which he got to ride.

That Sunday, Amilcar attended a mobility briefing for over 30 individuals at Chapelwood United Methodist Church, with the Loyds representing Free Wheelchair Mission. Amilcar offered insight on the impact the wheelchair has made on his life, from a past, present and future perspective. Many an eye teared up when he spoke of his aspirations of becoming a doctor.

Amilcar has lived with a disability for all of his life, his legs paralyzed since birth by spina bifida. His parents were so determined to give him a normal life and an education that his father would carry him to school every day until Amilcar graduated from high school.

Even with his education, Amilcar faced challenges finding a job, as many opportunities were lost to immobility. Intent on making a living on his own, Amilcar mastered the art of piñateria, creating marvelous pieces to sell. Yet, as excellent as his handiwork was, he couldn’t distribute his products very far without a mobility solution. His parents could no longer carry their adult son.

Yet, Amilcar persisted, working hard to sell what he could. For years, he dreamed of having a wheelchair that would give him independence and allow him to grow his piñata business. That dream came true when New Horizons Foundation for the Poor, our distribution partner in El Salvador, gave Amilcar a GEN_2 wheelchair.

Now, Amilcar can not only deliver piñatas to more customers, he can travel to the market to buy ingredients for his special-recipe ceviche, which is proving to be just as highly sought-after as his masterfully-crafted piñatas.

For a glimpse of Amilcar’s day-to-day life, click here to watch some video clips.

Thanks to supporters like you, people like Amilcar have received the gift of mobility after many years of waiting patiently for a breakthrough, doing whatever they could to make it through each day in the meantime. With an estimated 70 million people around the world who need a wheelchair but do not have the means to buy one, it’s no surprise that some of our distribution partners have reported long waiting lists to receive a wheelchair.