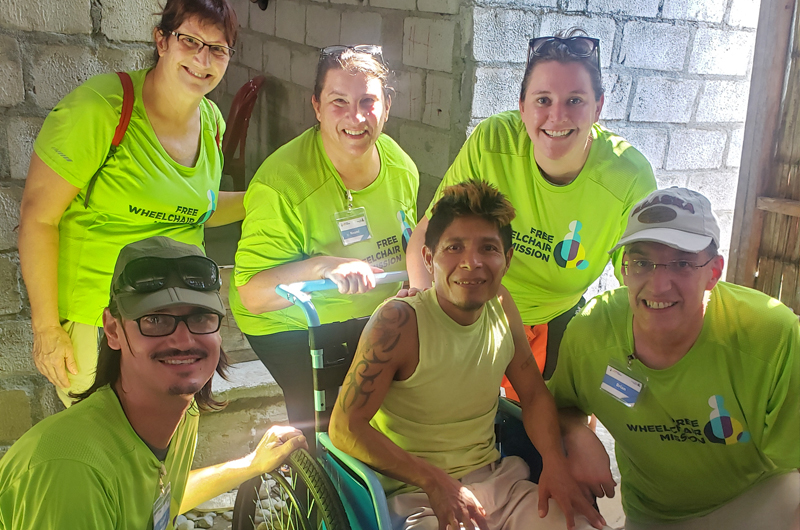 This story comes to you from a team at Right at Home, a Nebraska-based company that has been partnering with Free Wheelchair Mission since 2017.

In late 2019, just months before travel restrictions imposed by the pandemic, a team from Right at Home embarked on a vision trip to distribute wheelchairs in Ecuador. They shared about their experience delivering a wheelchair to a 46-year-old named Jaime.

Jaime is a member of the Chachi indigenous community, which is often persecuted and marginalized. In 2011, he was out with his friends when they were targeted in a brutal attack by a masked assailant. “I’m not a bad person,” insists Jaime. “I was assaulted because I am Chachi.”

In the attack, Jaime sustained severe spinal cord injuries that left him unable to ever walk again.

The team from Right at Home, working with our local distribution partner, Fundación Vista Para Todos, assembled a wheelchair for Jaime and loaded it onto a van for delivery to his home in a small village, where he lives with his parents and siblings.

“When the van stopped and we’d exited, I questioned whether we were at the right address,” recalls team member Brian C. “I saw a structure of cinder blocks that appeared to be under construction and some sort of an add-on room in front of that. They built what they could afford and there was no more money to do anything else.”

This additional structure turned out to be Jaime’s room, where he spent most of his time on an old mattress on the floor. “The room was wide open to the elements,” remembers teammate Jackie M., “so Jaime was worried about the coming rainy season. His main concern was that rats and snakes would get into the open room.”

The team unloaded the new wheelchair and, with some finesse, managed to get it through the narrow openings to Jaime’s house. When Jaime saw his new wheelchair, “he almost sprang forward to get into it,” said Jackie. “He laughed and said he was so excited!”

Teammate Lorraine G. added, “He and his parents had the brightest smiles on their faces and were very appreciative.”

The trip left an indelible mark on the Right at Home team. “Jaime’s story has had a huge impact on me, and I keep thinking of him daily,” reflected Jackie. “Being able to see Jaime’s smile and the smile of his mother as she kisses her son was unbelievable. Mobility and independence make a giant impact on people’s quality of life. I was lucky enough to see it firsthand.”

Companies like Right at Home are empowering their employees to make a difference in the lives of others, like Jaime. To learn more about how your company can partner with us in this mission for mobility, please visit this page.