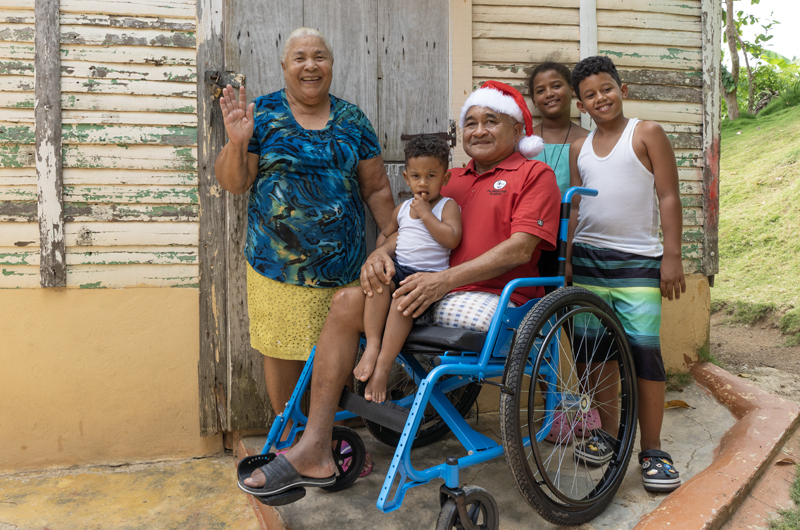 Nicasio, a 58-year-old in the Dominican Republic, lives with his mother, daughter, grandchildren, and several nieces and nephews. When a wheelchair distribution team visited his home earlier this year, the first thing they noticed was how close-knit this family seemed to be. It was obvious that they all loved one another dearly.

Nicasio used to work hard as a farmer to provide for the family but had to stop when complications from diabetes and an infected wound led to the amputation of his left leg.

It has been a challenging time for Nicasio and his family. At first, he would try to use a walker, but it was still difficult for him to walk with it on one leg. He would need help from his mother to move around the house without falling.

Leaving the house was even more challenging. Therefore, Nicasio would spend most days at home, leaving only for important medical appointments.

Being homebound and unemployed was leading Nicasio towards despair.

But because of your prayers and support, Nicasio received a new GEN_3 wheelchair through El Buen Samaritano (“Good Samaritan”) Hospital, one of our distribution partners in the Dominican Republic.

Now, Nicasio can move around the house and go out on his own without feeling like a burden to his mother.

“My hopes have been lifted.” said Nicasio. “I know that God has given me strength [to go on].” With mobility, Nicasio looks forward to visiting friends, going to church, and learning new skills that would help him earn some income to provide for his loved ones.

Thank you for being part of Free Wheelchair Mission. Together, we have provided more than 1.3 million wheelchairs to people living with disabilities in 94 developing countries, like Nicasio.

Together, we can continue to serve the needs of the estimated 75 million people worldwide who are still waiting for a wheelchair.