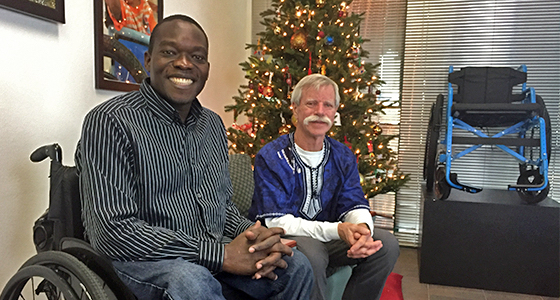 How one wheelchair would help over 7,000 people

A word of thanks from Uganda

Francis Mugwanya, founder and director of Father’s Heart Mobility Ministry in Uganda, recently visited our office and shared this holiday message of gratitude to you:

Francis knows firsthand the impact that the gift of a wheelchair can make.

He has been unable to walk ever since contracting polio at the age of three. Forced to crawl on the ground, Francis “hated being dirty” and was often mocked for his disability, which was seen by Ugandans as a curse.

When Francis was 11 years old, an organization gave him a wheelchair – a gift that offered him the freedom to go to school on his own, socialize with friends, and attend church on Sundays.

The gift changed his sense of identity and gave him greater confidence.

Having personally seen the opportunities made possible by the gift of a wheelchair, Francis has dedicated his life to giving this gift to others. He began by saving up his own money to buy wheelchairs for other people – at the time, one wheelchair cost him one-and-a-half month’s pay.

Today, the organization he founded has distributed over 7,000 wheelchairs to people with disabilities in Uganda.

Because of you, an average of 180 people per day receive the life-transforming gift of a wheelchair somewhere in the world. You never know who among them will go on to serve as leaders in their communities, like Francis, who lives to give away what he once received.

Isn’t this the true spirit of the season?

There are more stories like Francis’ just waiting to be written.

Thank you for being part of it all.