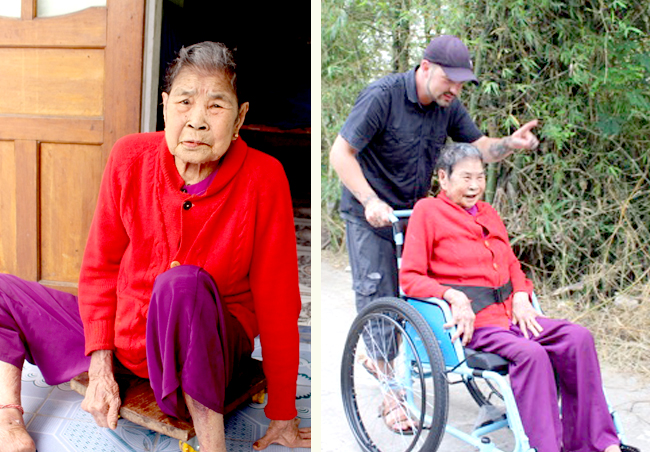 Mrs. Tria has known great tragedy and major adversity in her 88 years. She lives with her son and his family in central Vietnam, because her husband died in the war in 1968 and she never remarried. Three years ago, at the age of 85, her feet became curved and her joints became stuck, making it impossible for her to stand or walk.

Her son built a “skateboard” – basically a wooden board with four small wheels – so that Mrs. Tria could slide herself around the house. For the last three years, this simple board was the only way that she could move about her house because her son and his family go to work every day.

Despite her disability and old age, Mrs. Tria has a sound mind. But she felt hopeless and needed help. Everything changed when Tria received her first wheelchair, a GEN_2 wheelchair from Free Wheelchair Mission delivered by our distribution partner, Giving It Back to Kids.

Her family and neighbors were very happy for her, but Tria initially struggled to propel herself in the wheelchair. When she first sat in the wheelchair, Mrs. Tria tried to move on her own but she hit the wall several times because one of her arms is weaker than the other.

A lifetime of challenges has taught Mrs. Tria to persevere, and she refused to give up. She learned how to propel the wheelchair by herself, and now she is able to use it visit her neighbors and relatives. As you can see, she loves moving!

Mrs. Tria said, “I can’t say in words, but I’m very grateful for your giving me the wheelchair. I spent three years on the skateboard and now everything is easier.”

Thank you for your generosity! Your donation is providing the transforming gift of mobility to Mrs. Tria and other people like her all around the world.

P.S. In case you haven’t heard, last week’s Miracle of Mobility event raised more than $1.5 million – enough to transform the lives of more than 19,000 people!