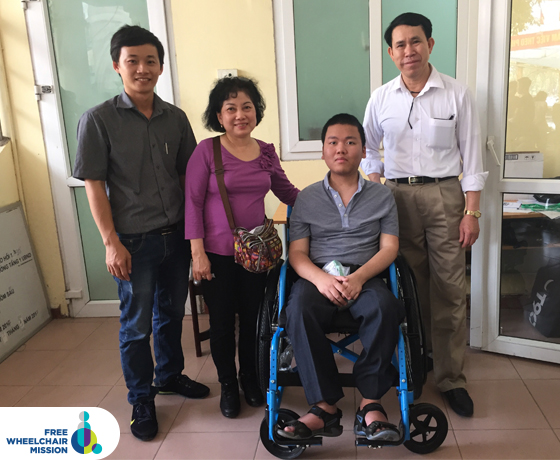 Any parent would have done the same

Trung is a 22-year-old university student in Vietnam.

He was born with polio. For most of his life, Trung’s father, who works odd jobs at a local hotel while Trung’s mother works as the editor of a local newspaper, would carry Trung everywhere on his back, every day – even into Trung’s senior year of college.

This was no easy feat, as Trung now weighs 144 pounds.

When asked what motivated him to do this for his son for so long, Trung’s father replied, “Love. Any parent would do the same.”

“I got used to carrying him on my back,” he continued, “but I’m getting older now and my back aches. I cannot carry him every day anymore.”

Trung received a new GEN_3 wheelchair earlier this year. He is now able to complete his studies as a software engineer without his father having to carry him to his classes.

“Having this wheelchair is such an incredible thing to him and our family,” Trung’s father expressed. “I believe this wheelchair will be helpful for his occupation and his life.”

Trung’s new wheelchair offered his family a renewed joy for one another.

Not only are his parents happy to see him growing in independence, Trung is overjoyed to see his father find rest and relief after so many years of selfless dedication.

Now, instead of being carried on his father’s back, Trung can travel with his parents side-by-side.

Thank you for all you do for families like these.